The ASUS GeForce GTX 1650 is built with the breakthrough graphics performance of the award-winning NVIDIA Turing. architecture.

Dual graphics cards are all about maximum efficiency. The recipe is simple; strip off features that don’t affect performance and mix in two powerful dust resistant fans with PCB components that are mounted utilising an automated manufacturing process. The result is a machine tuned purely for lasting performance, making the ASUS Dual GeForce® GTX 1650 a solid introduction to the latest generation of graphics performance.

Dust is enemy number one for fans. It’s easy to clean the blades, but taking the fan apart to remove dust that has made its way inside is not a simple task. IP5X certification keeps nasty particulates out of the housing, so you’ll never need that deep clean. 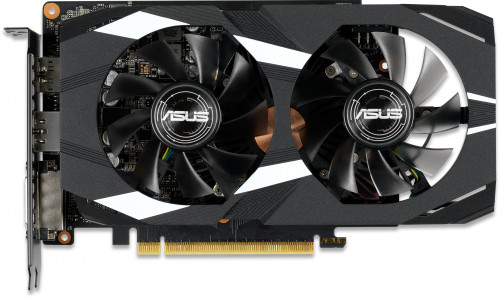 The ASUS GPU Tweak II utility takes graphics card tuning to the next level. It allows you to tweak critical parameters including GPU core clocks, memory frequency, and voltage settings, with the option to monitor everything in real-time through a customisable on-screen display. Advanced fan control is also included along with many more features to help you get the most out of your graphics card.

Each card must meet rigorous performance and reliability standards before it ships. Performance and stress tests are run with the latest chart-topping titles like Fortnite, League of Legends, Overwatch, and PlayerUnknown’s Battlegrounds. ASUS also carry out reliability trials that include a 144-hour stability test and a series of 3DMark benchmarking runs to ensure the card performs well when pushed to the limits.