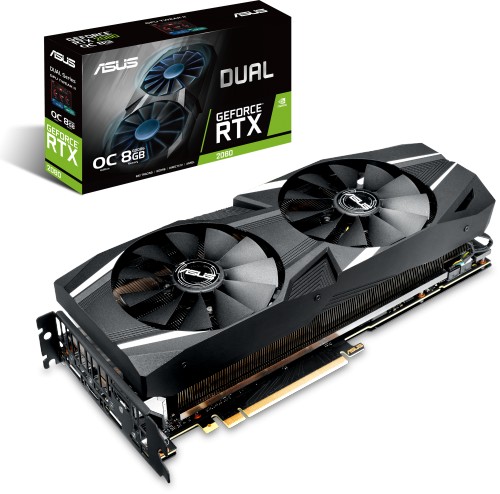 GeForce RTX graphics cards are powered by the Turing GPU architecture and the all-new RTX platform. This gives you up to 6x the performance of previous-generation graphics cards and brings the power of real-time ray tracing and AI to games. The revolutionary NVIDIA Turing architecture, combined with ASUS all new GeForce RTX platform, fuses together real-time ray tracing, artificial intelligence, and programmable shading to give you a whole new way to experience games.

Delivering the latest NVIDIA Turing gaming experience in its purest form, the ASUS Dual GeForce RTX 2080 melds performance and simplicity like no other. Leveraging advanced cooling technologies derived from flagship STRIX graphics cards, the Dual GeForce RTX 2080 opts for substance over style, the perfect choice for a well-balanced build. Buckle up and engage cutting-edge gaming prowess. 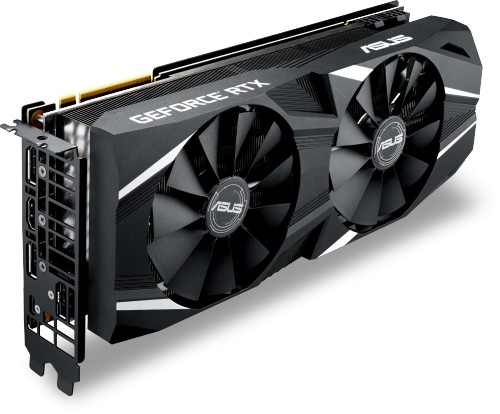 This generation of top-end cards adopt a 2.7-slot footprint to accommodate a larger heatsink because bigger is better. ASUS have increased the overall surface area of their cooling array by over 50% compared to previous gen. If you want to squeeze the most out of the Dual GeForce RTX 2080’s performance, the latest design gives you a lot more thermal headroom for overclocking. If you’re just looking for an amazing plug-and-play experience, the extra heat dissipation keeps your fans running at lower speeds while you game.

ASUS extensive performance and stress tests begin with the very latest chart-topping titles — like Fortnite, League of Legends, Overwatch and PlayerUnknown’s Battlegrounds. They also carry out reliability trials that include a 144-hour stability test and a series of 3DMark benchmarking runs to ensure the card performs well when pushed to the limits.

By combining advanced VR rendering, real-time ray tracing, and AI, the Dual GeForce RTX 2080 will take VR to a new level of realism. Cable management is much improved with VirtualLink, which utilises an Alternate Mode of USB Type-C to provide a quick, single-cable connection for next-generation VR headsets.

“I had some issues with the online check out. The wrong product would be added to the cart then what I was looking for. After a quick email it was solved and then I was able to get my new case. It showed up with in 2 days which was amazing for a international order. I couldn’t be more pleased. The w2 case is just beautiful much nicer then I could have imagined.”